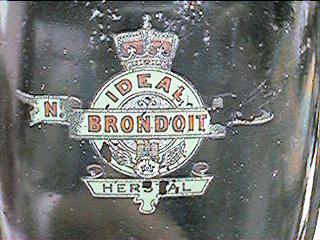 Very rare Belgian Idéal-Brondoit 250cc from 1922.
Nicolas Brondoit was a shoemaker from Herstal who built his first four-stroke built-in motors in 1900, which Bayard built into a bicycle frame. Between 1902 and 1918 Brondoit made mainly stationary engines. The company Idéal-Brondoit was founded in 1919 and started manufacturing 98cc two-stroke built-in motors. In 1925, due to financial problems, the company was taken over by Paul Le Bussy and under this leadership the range that went up to 250cc was extended with 350cc and 500cc. In 1928 Le Bussy crashed and the company was taken over by his brother George. He sold it in 1929 to Olivier Joly, an overhaul company that still exists today.
This Brondoit was sold in Herstal in 1922. Until 01/10/1970 this motorcycle hardly ridden and was sold by Mr. Widar van Banneux (Belgium) to a dentist in Pforzheim. On 21/09/1997 this Brondoit was sold by Peter Tripp to Michael Hendrickx in Macken (Germany). In 1998 this motorcycle was completely dismantled and overhauled. During this disassembly Michael saw that the piston was mounted rotated 180°. This probably explains the good condition of this bike because it had little power and therefore performed poorly. After correctly mounting the piston and replacing the bearings in the engine, it now runs very fast again.
Nice details of the engine are the 2 flywheels and the place of the magento under the running board on the crankshaft.
Of this model there are only 6 known.
Extra spare engine in good condition : 950 euro.